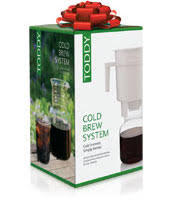 The best cold brew system there is!

A roasted coffee bean contains many compounds that are extracted during the brewing process. Some of those compounds, including certain oils and fatty acids, are soluble only at a high temperature. During the cold brew process, coffee beans are never exposed to high temperature (this only occurs after a rich liquid coffee concentrate has been produced).

Deceptively simple, cold water brewing extracts the delicious flavor compounds (and some of the caffeine) from coffee beans, but leaves behind myriad bitter oils and biting fatty acids, including undesirable elements such as ketones, esters and amides.

These are the same bitter acids and fatty oils that surface to the top of your hot cup of coffee, and give hot-brewed coffee that familiar ‘bite’ (thus the reason that some 8 out of 10 people attempt to soften the acidic taste by adding milk or cream to their coffee).

The cold brew process creates a perfectly balanced and distinctively smooth cup of coffee – served steaming hot or iced cold. You’re invited to taste the Toddy® difference: the same taste that has delighted coffee drinkers for over 50 years.